My background before becoming a milliner 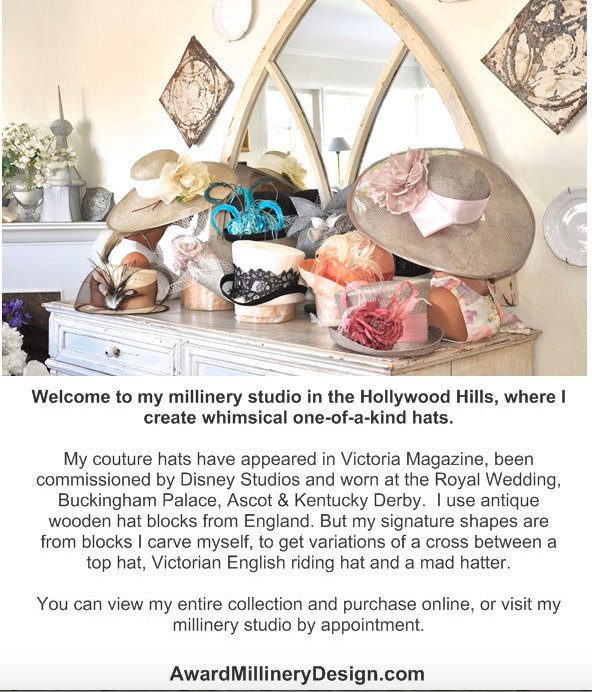 When I was in high school my English teacher asked us to do a report on something we loved. I was intreged with how Coco Chanel began her career as a milliner. The idea of creating something that has no real purpose except to lift the spirits and make people smile appealed to me. But before I got to that point decades later, these are some of the twists and turns my life took.

I studied fine art at Philadelphia College of Art, but I longed to live in London, the most cutting edge city in the world for fashion in the 1970s. I was accepted at University of London to do an honors degree in philosophy, and also worked as a fashion model, and then as a makeup artist and photographer for the major British fashion magazines. This enabled me to travel the world on photo shoots and work with inspiring people including Grace Coddington, David Bailey, Mary Quant and many other fashion illuminaries.

After eleven years in London I moved to Los Angeles and created a makeup school to train makeup artists in media makeup for TV, film and print. And one winter, when business was slow, I decided to try my hand at making hats. But I didn't want to make hats like other people made. Ideas of shapes and materials were swirling in my head, so I had to carve hat blocks in my own signature shapes. Some of my favorites are a cross between a top hat, a mad hatter and a Victorian English riding hat. I would describe my design esthetic as whimsical elegance.

After I made about thirty hats, I didn't know what to do with them. I had many more ideas and no more room. Then a friend told me about Etsy and suggested I sell my hats there. I use the highest quality materials which are very expensive and each hat takes me several days to dye, dry, steam, block, shape, stiffen, size and trim. But I price them very reasonably to enable almost everyone to be able to afford a beautiful couture hat.

My hats have been seen in Victoria Magazine and worn by guests at the last Royal Wedding. Disney Studios recently commissioned me to make nine hats for a video for the 2017 Oscars, and I sell many hats and headpieces for Royal Ascot, Buckingham Palace Garden Party, Kentucky Derby, Melbourne Cup and many weddings and events.